The Yorkshire Three Peaks Challenge - climbing Whernside, Ingleborough and Pen-y-ghent and returning to the starting point in a continuous circuit – is a tough undertaking. Covering a distance of around 24 miles, with a total ascent of over 1,600 metres, completing the route in under 12 hours is considered a notable achievement. 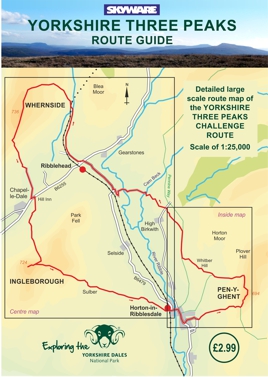 There is no official route or starting point to the Three Peaks Challenge, so you won't find it marked on OS maps. The the most popular route begins and ends at Horton-in-Ribblesdale, but Ribblehead, with its early morning train service, makes a better starting point.

Whernside is climbed first,  then Ingleborough and Pen-y-ghent. There follows a seven-mile trek over Horton Moor to the finish at Ribblehead.

In recent years the Challenge has become increasingly popular, particularly as a fund-raiser for charities. It is now not unusual on summer weekends or bank holidays to see over 1,000 people a day set out on the route from Horton. Consequently the way has suffered badly from erosion, particularly on the traditional route over the bogs at Black Dubb Moss on Horton Moor. Much of the track along the route elsewhere has been strengthened and improved over the years by the National Park Authority and volunteers, with stone slab pavement crossing the wettest sections.

In 2013 an alternative to crossing the bogs of Horton Moor was developed. This follows the Pennine Way down to the gate onto Horton Scar Lane, then up across Whitber Hill, over Sell Gill Beck to join the Pennine Way by Jackdaw Hill. It adds half a mile to the route, but the going underfoot is considerably easier, so in fact adds little extra time. Improvement works to the track, finished in spring 2013, have made this the preferred route and it is way-marked accordingly.

Since 1954 the annual spring Three Peaks Fell Race (which follows a slightly different course) has become one of the top international fell races, with up to a thousand runners entering, the best completing the circuit in well under three hours.

If you want to take on the Three Peaks Challenge it is better to avoid weekends and bank holidays. Avoid early morning starts in Horton - consider starting at a different point. Ribblehead, for example, makes a much better starting point, with an early train service, nearby free roadside parking, and less chance of disturbing local residents.

The early train (Settle-Carlisle line, as of May 2018) from Leeds leaves at 0517 weekdays (0620 Saturdays), arriving at Ribblehead at 0637 weekdays (0751 Saturdays). That gives around 14 hours or more before the last train back from Ribblehead (2145), plenty of time for the walk and to enjoy a celebratory pint and a bite to eat at the Station Inn afterwards before catching the train home. These trains also now stop at Horton.

Starting and finishing at Ribblehead has other advantages too: the Pen-y-ghent Cafe will likely be open as you pass through Horton in the early afternoon, so you can enjoy a sandwich and a pot of tea before the last mountain (those starting early from Horton may miss the cafe's opening hours altogether). All three peaks are tackled BEFORE the final 7-mile slog across Horton Moor, so if you've had enough after Pen-y-ghent you can nip back into Horton and save yourself that final stretch whilst still enjoying having topped all three peaks!

Though a worthy endurance challenge, this 24-mile slog is not the best way to get to know the Three Peaks themselves. It is much better to spend a few days in the area, stopping at an inn or B&B and using the train to tackle the peaks individually, as the walks in this book allow. Take time to explore and appreciate these very different, modest but beautiful mountains. This is also the best way to prepare for the endurance walk - taking on the Three Peaks Challenge should certainly not be your first introduction to the area. Perhaps having explored the mountains at a more leisurely pace, the need to put yourself through the gruelling trial will seem less important.

A detailed Yorkshire Three Peaks Route Guide (see above left) with mapping at a scale of 1:25,000 of the entire route, is available from Skyware Press for just £2.99.

A free overview guide to the Three Peaks Challenge Route, updated to take in the newly improved alternative Whitber Hill route, is available to download here as a pdf document (see left).

Or use the interactive OS map below.

A smartphone app produced by the National Park for the Three Peaks area, including the Challenge route, is also available to buy here.

In 2018 a new, tougher 30-mile version was promoted, starting and finishing in Ingleton. It is hoped that Ingleton's Three Peaks Challenge will help relieve the stress on Horton village, help promote Ingleton itself and offer a still tougher challenge for walkers!

Click / Tap anywhere on the map (other than on a Route Feature) to open a pop-up box showing the OS Grid Reference at that location.

Start continuous Geolocation-tracking. Your location is shown as a blue dot. If not within the current map area, zoom out until visible.

Click / Tap subsequently to open a pop-up box showing the OS Grid Reference of your current location, and the accuracy range.

To turn Geolocation-tracking OFF, refresh the browser window.

Resets the map with North upwards. Visible only when the map is rotated.

This should only be used as an AID to navigation - signals are lost and batteries fail. You should use the appropriate Skyware Guide or map, with a compass for PRIMARY navigation.